Fork me on GitHub

Big geospatial data have been produced, archived and made available online, but finding the right data for scientific research and decision-support applications remains a significant challenge. A long-standing problem in data discovery is how to locate, assimilate and utilize the semantic context for a given query. Most of past research in geospatial domain attempts to solve this problem through two approaches: 1) building a domain-specific ontology manually; 2) discovering semantic relationship through dataset metadata automatically using machine learning techniques. The former contains rich expert knowledge, but it is static, costly, and labour intensive, while the latter is automatic, it is prone to noise.

An emerging trend in information science is to take advantage of large-scale user search history, which is dynamic but contains user and crawler generated noise. Leveraging the benefits of all of these three approaches and avoiding their weaknesses, a novel approach is proposed in this article to 1) discover vocabulary semantic relationship from user clickstream; 2) refine the similarity calculation methods from existing ontology; 3) integrate the results of ontology, metadata, user search history and clickstream analysis to better determine the semantic relationship. 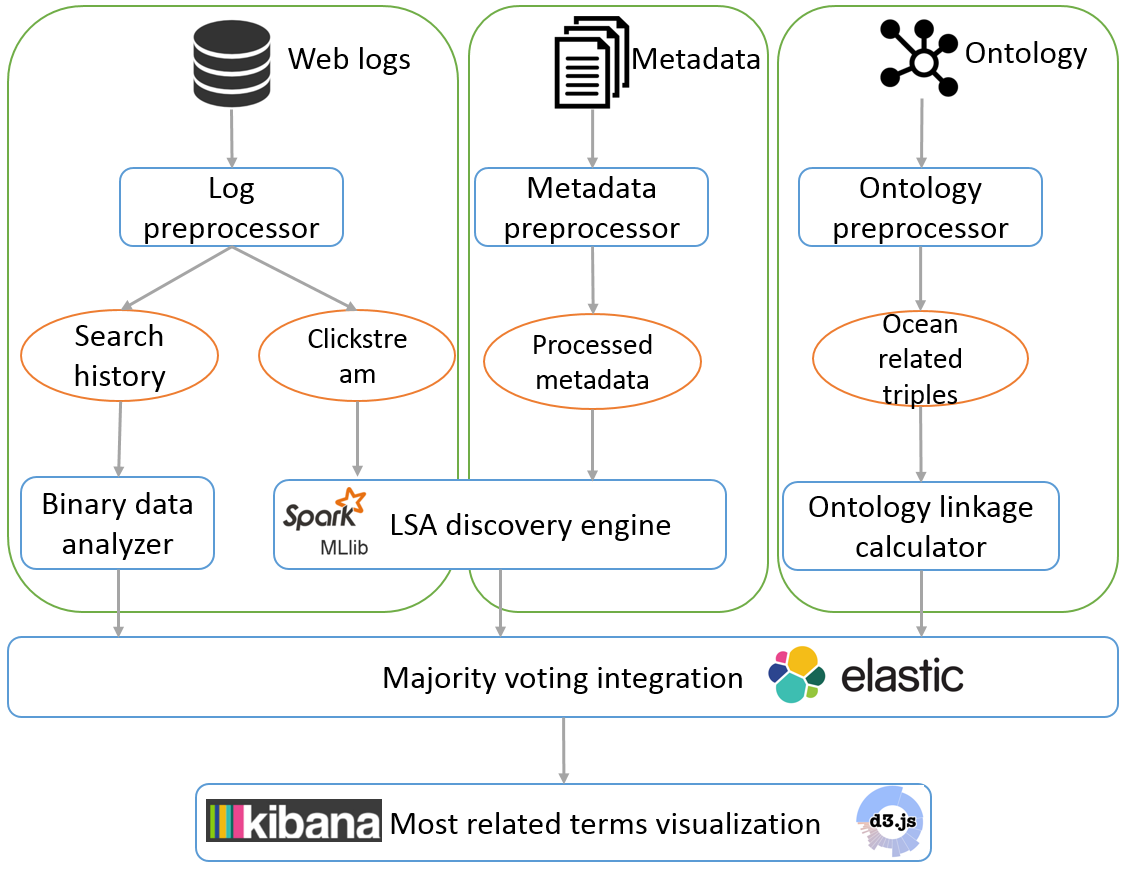 An introduction to MUDROD recommendation algorithm

With the recent advances in remote sensing satellites and other sensors, geographic datasets have been growing faster than ever. In response, a number of Spatial Data Infrastructure (SDI) components (e.g. catalogues and portals) have been developed to archive and made those datasets available online. However, finding the right data for scientific research and application development is still a challenge due to the lack of data relevancy information.

Recommendation has become extremely common in recent years and are utilized in a variety of areas to help users quickly find useful information. We propose a recommendation system to improve geographic data discovery by mining and utilizing metadata and usage logs. Metadata abstracts are processed with natural language processing methods to find semantic relationship between metadata. Metadata variables are used to calculate spatial and temporal similarity between metadata. In addition, portal logs are analysed to introduce user preference.

An introduction to MUDROD ranking algorithm

When a user types some keywords into a search engine, there are typically hundreds, or even thousands of datasets related to the given query. Although high level of recall can be useful in some cases, the user is only interested in a much smaller subset. Current search engines in most geospatial data portals tend to induce end users to focus on one single data characteristic/feature dimension (e.g., spatial resolution), which often results in less than optimal user experience (Ghose, Ipeirotis, and Li 2012).

Within the ranking process, each query will be associated with a set of data, and each data can be represented as a feature vector. Eleven features listed below are identified by considering user behaviour, query-text match and examining common geospatial metadata attributes.

RankSVM, one of the well-recognized learning approach is selected to learn feature weights to rank search results. In RankSVM (Joachims 2002), ranking is transformed into a pairwise classification task in which a classifier is trained to predict the ranking order of data pairs. 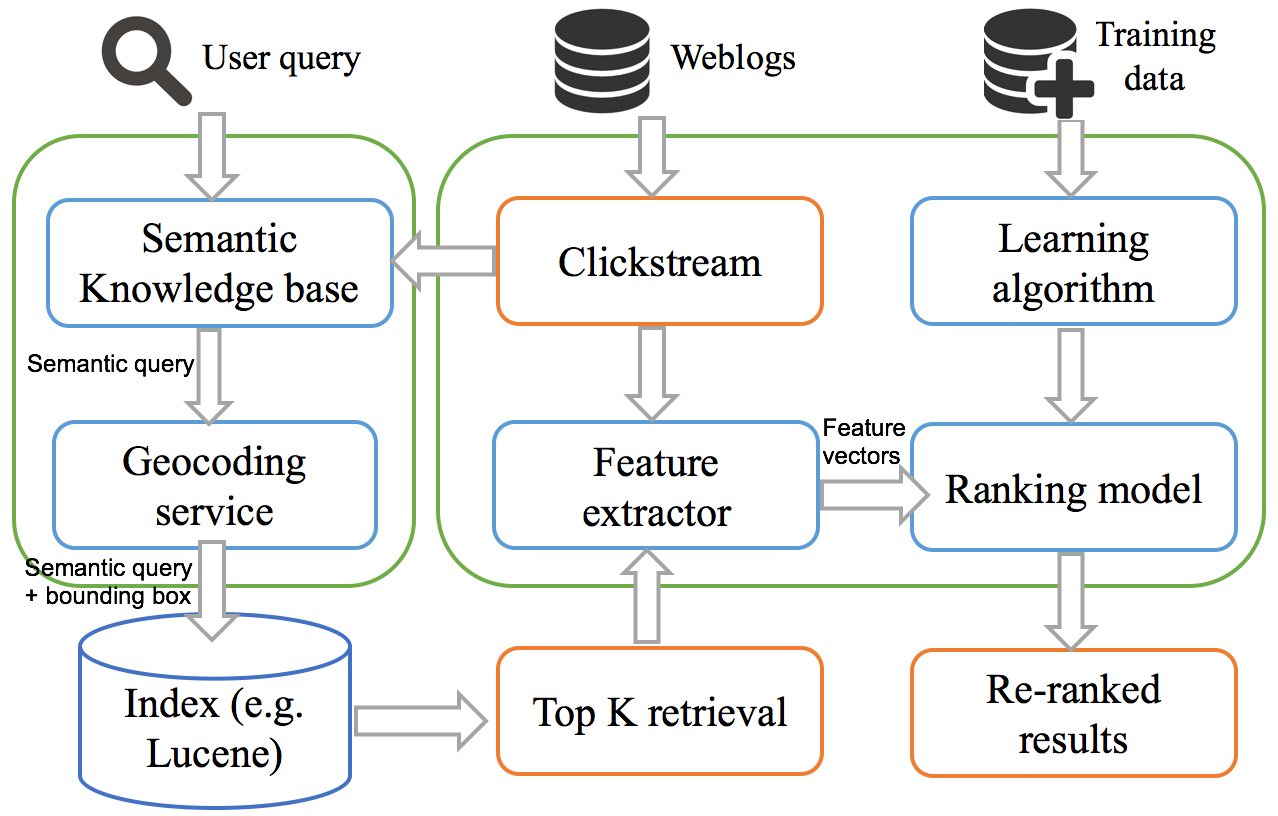 The proposed architecture primarily consists of six components comprising semantic knowledge base, geocoding service, search index, feature extractor, learning algorithm, and ranking model respectively (Figure 1). When a user submits a query, it is then converted into a semantic query and a geographical bounding box by the semantic knowledge base and geocoding service. The search index would then return the top K results for the semantic query combined with the bounding box. After that, feature extractor would extract the ranking features for each of the search results, including the semantic click score. Once all the features are prepared, the top K results would then be put into a pre-trained ranking model, which would finally re-rank the top K retrieval. As the index in this architecture can be any Lucene-based software, it enables the loosely coupled software structure of a data portal and avoids the cost of replacing the existing system.